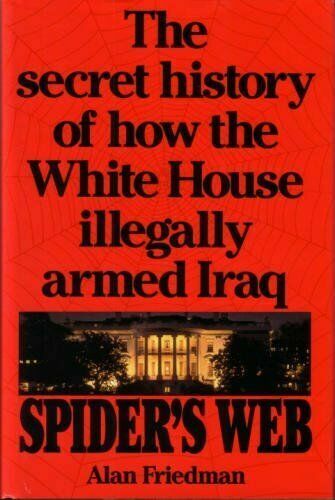 Investigative reporter Alan Friedman, an American who is a prize-winning correspondent for the Financial Times of London, here tells a story of oil, money and political power. Its essence is that the West, led by the United States, created a monster it then had to destroy. The characters include President George Bush, Secretary of State James Baker, Saddam Hussein, Margaret Thatcher, Ronald Reagan, Giulio Andreotti, various officials from the Banca Nazionale del Lavoro and the other usual suspects in the Middle East. Friedman’s sources for this tale of intrigue and conspiracy include heretofore secret government documents (the appendix reprints more than 60 pages of declassified documents) and hundreds of interviews, many of them with that favorite source of investigative reporters, the informed official who wishes to remain anonymous.

Friedman writes that the American and British effort to arm Iraq, even with nuclear weapons, using Italian money to finance the operation, was the world’s first global political scandal. That takes in quite a bit of ground. Still, what he demonstrates certainly stinks up the place. In briefest outline, Bush and Baker and their fellow conspirators in London and Rome sold arms and technology to Saddam, lied about it and then covered it up when it was exposed. The ultimate coverup was Operation Desert Storm. In his summary sentence, Friedman writes, “More than anyone else, Bush and Baker must bear responsibility for paving the road to Operation Desert Storm, a war they justified as necessary in order to wipe out the very nuclear weapons capacity that the U.S. had helped to foster.”

Friedman’s indignation at the policy and the duplicity runs high. He fears that if the coverup is allowed to stand unchallenged, the future of democracy is imperiled. He calls for investigations by Congress, the Justice Department and Parliament to pursue allegations wherever they may lead, regardless of how politically awkward that might be.

Given the result of the $37 million spent by the special prosecutor on the Iran-Contra investigation, or that of nearly all politically charged investigations into past policies, and given that anonymous informants are much more likely to talk to reporters than to prosecutors, one has to wonder what good such investigators would do. Like F.D.R. and Pearl Harbor, this case is best left to historians.